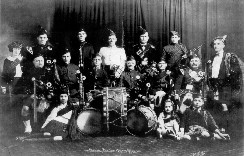 The history of the Cincinnati Caledonian Pipes and Drums begins about 1912 by a Canadian immigrant William Lorne Nimmo whose family moved to Cincinnati. William Nimmo was a Lieutenant in the police force and an avid bike rider. After moving to Cincinnati, Mr. Nimmo set about putting together a pipe band, and as he states in his autobiography “I organized a pipe band, assisted by some good businessmen of the Caledonian Society (of Cincinnati).” When the band was first started, it had some 20 members, and performances consisted of piping, drumming and dancing displays along with a four-round boxing match put on by William’s two sons Donald and Lomond (10 & 11 years of age).

During WWI, the band gained much notoriety by leading weekly parades supporting the war effort and Liberty Loan drives, visiting the training camps, hospitals, Red Cross and other affairs in the interest of building up morale. It was after WWI when a number of veterans from the Seaforth Mackenzie Highland Regiment joined the band that it adopted the Mackenzie Tartan and the regimental hat badge (a stag’s head with the saying Cuidich’n Righ – Support the King) both of which are still proudly worn today.
In the 1930s, some of the members spent considerable time traveling the States in a converted Chevy school bus they referred to as “the Wee Hoose” complete with a grand set of great highland antlers attached to the front grill.

In 1953, the Society got into the piping business in earnest when member Wallace Evans gave the organization a set of bagpipes. In 1954, a pipe band committee was organized. Included in the roster at this time was Lomand Nimmo who by now had put down his boxing gloves and had taken up playing the pipes in the footsteps of his father. 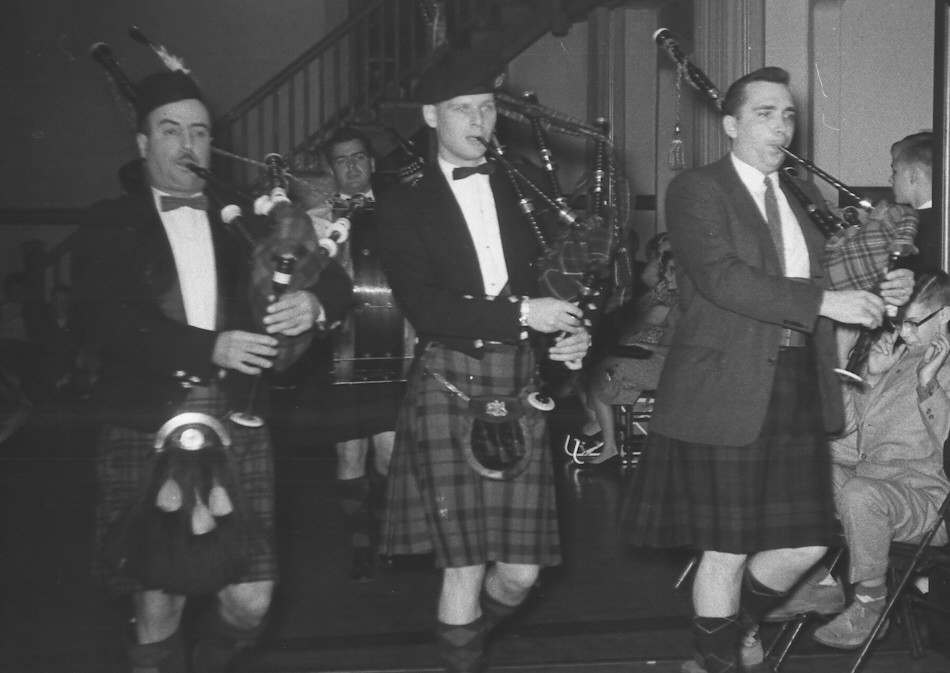 By 1959, sponsorship by the Caledonian Society of a pipe band became a reality, and its Cincinnati Pipe Band performed for the first time at the St. Andrew’s Night celebration, an annual Society tradition since 1827. To remain self-supporting and repay loans from the Society used for uniforms and equipment purchase, the Pipe Band began to book paid appearances.

The first Pipe Major of the band was Alvin Spivak, appointed in 1961, followed by Lomond Nimmo In 1964. Under full steam in 1965, the band made 37 appearances, including one at the Ohio State Fair. In 1968, the band led the famous St. Patrick’s Day Parade in Cincinnati, and continues to do so to this day. 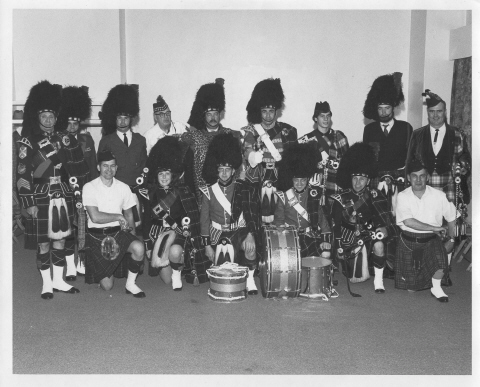 1970 was the first year the band held its first Annual Tartan Ball. The Ball has evolved into the Tartan Ceilidh, held on a Saturday night in April, in conjunction with National Tartan Day which is April 6th. It is regarded as being one of the most colorful Scottish events in the Cincinnati area. 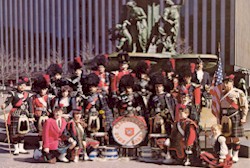 In 1973, the band established itself as a separate entity from the Caledonian Society, changing its name to “Cincinnati Caledonian Pipes and Drums”, and received its Incorporated status.
In 2002, the band attained its 501c3 nonprofit tax certification. In 2002 the band was declared by Mayor Charlie Luken as Cincinnati’s Official Pipe and Drum Band. That same year the band was also declared the official pipe band of Clan Mackenzie’s Eastern Region. 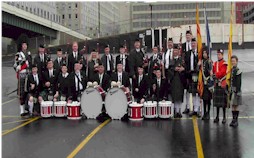 In 2006, the band merged with the Mad Anthony Wayne Pipe Band and fielded competition bands in Grades 3, 4 and 5.
The Caledonian Pipes and Drums Band currently has about 25 performing pipers and drummers and has consolidated into fielding one grade 5 band in recent years.
The band has had the pleasure to play at such events as opening for The Black Watch, and Rod Stewart, playing the half time show for the Cincinnati Bengals, opening the Cincinnati Celtic Festival, leading the Cincinnati St. Patrick’s Day parade, and many other events throughout the Tri-State area.
The band is also very much a teaching band, with students ranging from beginner to advanced. We practice weekly at Springdale Nazarene Church. Individuals interested in learning piping are encouraged to contact the band.